Have any questions? Get An Appointment

There are still dozens of important tables in Dynamics 365 for Finance and SCM not exposed by any entity. Sometimes simple solutions like my Copy-paste with a keyboard script from Excel don’t work due to the volume or complexity of the data, and sometimes there is no UI at all.

One of the notorious examples is the table EcoResCatalogControl which is associated with product attributes bound to procurement categories, see the Searchable flag in my blog Searchable product attributes. An import of these “Product category attributes” through the entity EcoResProductCategoryAttributeEntity leaves the attributes dysfunctional: the internal table EcoResCategoryAttributeLookup is left out of sync and the new attributes remain invisible in the product master.

First, create a model, for the simplification its structure may follow exactly the table.

Next, create a mapping with the Direction = To destination. Add the target table to the right with the button Destination, then bind the model from the left to the table at the right side of the Model mapping designer. Change the status of the configuration to Complete.

Next, create a format configuration based on the model. It should describe the CSV file structure, namely a set of records (Lines) separated by CRLF, with 2 fields in every line, separated by the semicolon “;” (in a German version of the Excel; in an English version the comma “,” is more appropriate). The encoding of the CSV format should better be UTF-8 (Excel is able to produce UTF-8 encoded files).

Once tested, update the format status to Completed. Make note that the import is started from the artefact (2) Model mapping to destination (with the button Run). The system looks for a format based on the model the mapping belongs to, and inside of that format it looks for a “To model” mapping.

Having found an appropriate format, the system asks for a CSV file and unleashes the import, there is no way back.

Added on 31.01.2020
Electronic reporting destination mappings can also be used to launch X++ code. If you have ever worked with production routes, you may have noted the Update route button. The class behind is called RouteUpdate and it is executed by the system automatically from the UI on any change in the order of operations. On plain production routes, it updates the Next operation numbers, and multiplies the variable scrap percentages to cache and store accumulated scrap factors. The problem is, this class cannot be run over all routes in the batch mode; in the Route headers entity they forgot to use it. Opening every single route out of thousands imported is obviously not an option.

I took the same CSV file and created a new destination mapping which updates the RouteTable. One column in the CSV file (Attribute) contains the key RouteId, the other (Category) bears the route name. I am updating the name by the key, but in the middle I am injecting the following code
RouteSearch.newRouteId(@.Attribute).routeId
like this
LEFT(RouteSearch.newRouteId(@.Attribute).routeId,0)&@.Category
It instantiates and executes the RouteSearch class which as a by-product calls RouteUpdate in its constructor method, then gives a routeId() value back which I neglect. Thousands of routes are updated blazing fast, and the Next operation and the Accumulated scrap is set everywhere:

The ER configuration can be downloaded here: RouteUpdateMapping.zip.

Added on 16.04.2020
Finally, I have designed a data model and mappings for the fixed fee project On-account transactions aka Billing milestones. The configuration may take a project TransId from the CSV file, or it may create its own from the standard number sequence in the Project module parameters. Both the related tables ProjOnAccTrans + ProjOnAccTransSale are generated.

The ER configuration can be downloaded here: ProjOnAccTransModel.zip
Fun fact: a DMF entity for this existed in AX2012, but not D365.

The above crude trick works, but it is dangerous. Fixing a broken import might be a challenge, because to delete the data and start all over you need to change the destination Record action to Delete and then hope to find the right record by the primary key from the CSV file.

I would love to use standard entities, and make Microsoft add them to the application. Please vote for my 2 “favourites”: 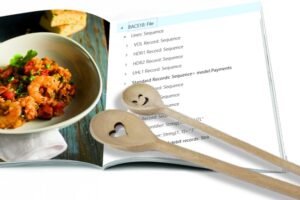